As I promised yesterday, today I’m tackling the surprisingly thorny topic of good versus bad/evil. Thorny? But we all know what is good, right? And we’re all united over what is bad? Well, hardly.

In a conversation with a friend we were talking about Desmond Tutu — a prominent figure in world news of the 90s.
“Such a bad guy … Errr, right?”
“Nooo no, he was fighting for human rights; he was he up against the bad guy… Was he not?”
All we could agree upon was that Tutu was involved, pro or contra, in some human-rights atrocity. Tutu was very something — either good or bad. Definitely very that something!

Surely either me or my friend had a false memory, since Tutu could not be both good and bad (though, read on, even this gets challenged). False memories, when it’s at play in greater society, is sometimes called the Mandela Effect due to the curious phenomenon of many westerners falsely “remembering” that Nelson Mandela died in the 1980s.

Poor Mandela also died in 1991, according to a South African school textbook and the conspiracy theorists that jumped on this “evidence”. And again in June 2013 thanks to rumours propagating through South Africa at the time and spread further by CNN. How many respawns does this guy have? Mandela died again in December 2013, and this time it seems it was final. As it turns out, Desmond Tutu is intricately linked to the serially-dying Nelson Mandela, both working together to rebuild the post-apartheid government. Coincidence, or perhaps the media are just generally really bad at getting the facts straight in South Africa leading to scrambled and/or false memories.

This is one direction in which our confidence in what is good/bad can be shattered. Our memories are quite fallible. But I don’t want to dwell too much on this fairly basic and well-understood (if not so very well-accepted) error of judgement. There’s plenty of articles going into nauseating detail about various cognitive errors/biases.

The Good Villains, The Bad Heroes, and the Ugly Me

Far more interesting, more confronting, are the good/bad judgements we make even given the correct facts. Note here, judgement is a human act, prone to error, and performed differently by different people. A judge’s ruling may be appropriate; or it may be flawed; or even appropriate to some, but not to others. The death sentence is allowed in some cultures, but not in others. And within each these cultures are, of course, individuals who for or against it. Historical trends indicate the death sentence will be inevitably abolished altogether, but in the meantime there are hangers-on.

As will become demonstrated more than once in this blog, what we might take for granted in our home culture, Our Invisible World on Display, is in fact far from being an absolute truth or anything universally applicable.

We judge others to be good or bad, and in turn we and our actions are judged good or bad. Of course, most people in our lives aren’t noticeably good nor bad. Strangely, if we go to the extent of putting such labels on people, we seldom accept the fact that someone may be both good and bad.

A guy promoting public health schemes and embracing preventative health and is kind to animals — he’s a good guy, right?
Like… Adolf Hitler?

A guy who, due to personal ideology, denies his children education and withholds life-saving medicine from his wife is bad.
Like… Mahatma Gandhi?

In those rare moments of rationality we do actually reason that every real-world villain has a redeeming feature, every real-world hero has so-called skeleton in his closet (a dark side); it’s foolish to think any one human is absolutely either good or bad. I’ve had to include “real-world” there, because Hollywood and mainstream fiction tend to push these absolute judgements on to us.

For all our progress from the Age of Reason, we’re still hopelessly prone to glamourising high-status persons on a one-dimensional morality swing: either fame or notoriety. But not both. Never both.

I’ve got a bad feeling about this

Anakin Skywalker: “The Jedi use their power for good.”
Chancellor Palpatine: “Good is a point of view, Anakin. The Sith and the Jedi are similar in almost every way.” 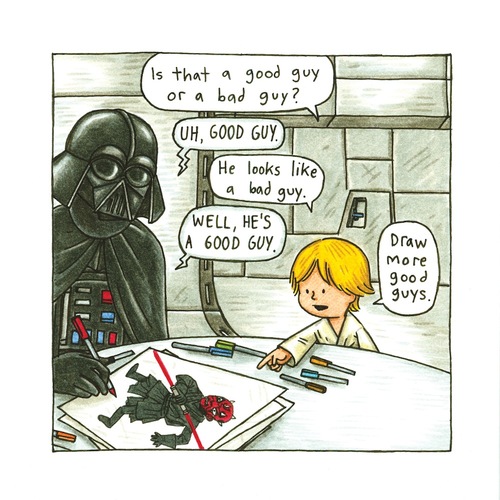 George Lucas left us with a fictional universe complex and detailed enough for us to make some interesting re-interpretations. In the article We All Thought The Sith Were Pure Evil, But What If We Were Wrong, the author Coovadia digs a bit deeper to evaluate what is good and evil in Star Wars. As a 12 year old watching for the first time A New Hope (back then, just called Star Wars), it was obvious to me the Sith were the bad guys. I mean come on — they dress in black, have red light-sabres, intimidate subordinates, and are accompanied by menacing music!

I guess the Jedi had watched the same movie. Based on little more than “He’s Sith — get him!” they commit high treason and apprehend Palpatine. A classic act of religious intolerance — an absolutist good/bad judgement.

Finally, it’s time to get really thorny. I’d like to explore one effect of this way of thinking at two extremes of the scale, something psychologists call dichotomous thinking. It came as a slap in the face following the Columbine shooting, and continues to slap me in the face with every subsequent mass shooting in the USA. What I always see are over-simplistic explanations for it — the shooter is (or more likely the historical “was”) evil. Case-closed. Let’s go have lunch.

Until 3 days later another such evil surfaces.

What allows someone to act in such stark contradiction to social norms, and commit mass murder, is a complex lifelong accumulation of factors including genetic disposition, parenting style, social accommodation, physical environment, self-regulation strategies, and all the interaction effects between these. Explaining away the question of why or how someone would gun down dozens of unarmed people with “oh, he was evil” is like blaming Odin for having not done your laundry. The rejection of responsibility, the denial of reality, it’s astonishing.

Some have attempted to delve deeper than this neolithic pagan mentality and have cleverly unearthed the following chain of cause and effect: 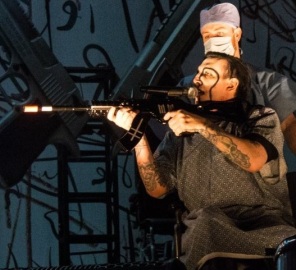 Evil like Hitler, or like Gandhi? Or Luke Skywalker? In any case, this steals some power away from the gods and returns it to mortal (i.e. non-Mandela) human beings. Now we can intervene, by muting Marilyn Manson, no more evil, no more shootings. Let’s go have lunch.

Are you feeling the slaps in the face that I was talking about?

These simplifications cheat ourselves out of a proper investigation. The curious mechanisms at play within these extreme individuals, and the prevailing circumstances that drive them to the edge, remain as unsolved footnotes in a very thin case file. We owe it to the future victims to take on responsibility of understanding what is going on with such radical mindsets and, armed with that knowledge, act to work on realistic preventative measures.

Good to be Bad

I think humanity will slowly grow up from the ancient the good-versus-evil mentality. Sure, we might corrupt some heroes on the way with some inconvenient truths. But at the same time we make them more human, we bring them closer to us, to who we are.

Maybe it’s time we take a more Michael Jackson-style interpretation of “bad” into our lives, in that bad might be kinda good?

And the whole world has to answer right now
Just to tell you once again
Who’s bad?